Space is a frontier that, at first thought, may appear far beyond the scope of researchers at the UW Carbone Cancer Center. But as a comprehensive cancer center, the efforts being made through both clinical and technical achievements to better understand and interpret the burden of cancer, continue to reach new heights.

Ongoing space radiation research – including contributions from one UW Carbone member – is helping NASA better understand the cancer risk associated with interplanetary space travel. It’s research that not only has implications for astronauts heading to Mars, for example, but also for cancer patients here at home.

This research, along with many other critical initiatives at UW Carbone to better interpret cancer diagnoses and treatments, was facilitated through UW Carbone’s Shared Resources. This unique branch of UW Carbone plays a key role in the technical operations of research here, with the ultimate objective of “supporting multidisciplinary research and uniting physicians and scientists to speed the transfer of science to patients.”

The Experimental Animal Pathology Laboratory (EAPL) is one example of the research facilitation made possible through Shared Resources, as the lab played an integral role in the recent space radiation research from Rich Halberg, PhD.

With a specific focus on providing essential histology services to UW Carbone, EAPL utilized mouse models to better interpret the causes of cancerous tumors that resulted from space radiation. Using a set of samples, the research team at EAPL carefully organized each individual sample into a tissue set which were held in biopsy cassettes.

Tom Pier, EAPL Research Specialist, spoke on the next step of this process as the tumors were reduced in size to better interpret them on a microscopic level.

“We’d take the tissue out of the tube and we’d snap the lid close and then this would go onto our tissue processor which dehydrates the tissue through a series of graded alcohols,” Pier said. “So start out at 70 percent, 80 percent, 95 percent and 100 percent, then clear the alcohol out with xylenes and then infiltrate with paraffin.”

This process speaks to the precise measures that were taken by EAPL, but it was this precision at times that became quite challenging throughout the duration of their work.

“The biggest challenges were really just maintaining the order and being certain that the samples were what we said they were and where they were,” Pier said. “So the only real hiccup was having to gross some of the very large tumors down to a smaller size so we could get everything we needed to into the blocks.”

These blocks, which required a precise lettering system to properly identify each of the samples, provided the framework for the research conclusions made by Halberg and his co-author, Jeff Bacher, PhD, at the Promega Corporation. Among such conclusions came the confidence that the mouse models could translate to a better understanding of similar cancers, such as liver cancer, in humans.

“Many of the molecular features of the tumor, and many of the clinical tests that would be run, our mouse models actually mimicked what would happen in the clinic essentially,” Halberg said.

This research has also sparked an excitement for future research supported by Tom Pier, and his associate Joseph Hardin at EAPL, and more studies could happen down the road – all facilitated by UW’s premier provider of histology services.

So, even if humans aren’t heading to Mars anytime soon, the impact of Pier and Hardin’s technical facilitation as well as Halberg’s space radiation research will have a much more immediate impact, and arguably in a more important place: right here on Earth.

NOTE:  You can read more about this research here. 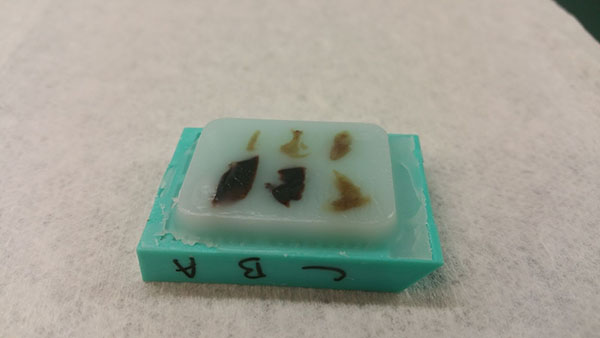 Photo provided by Tom Pier of a tissue block.